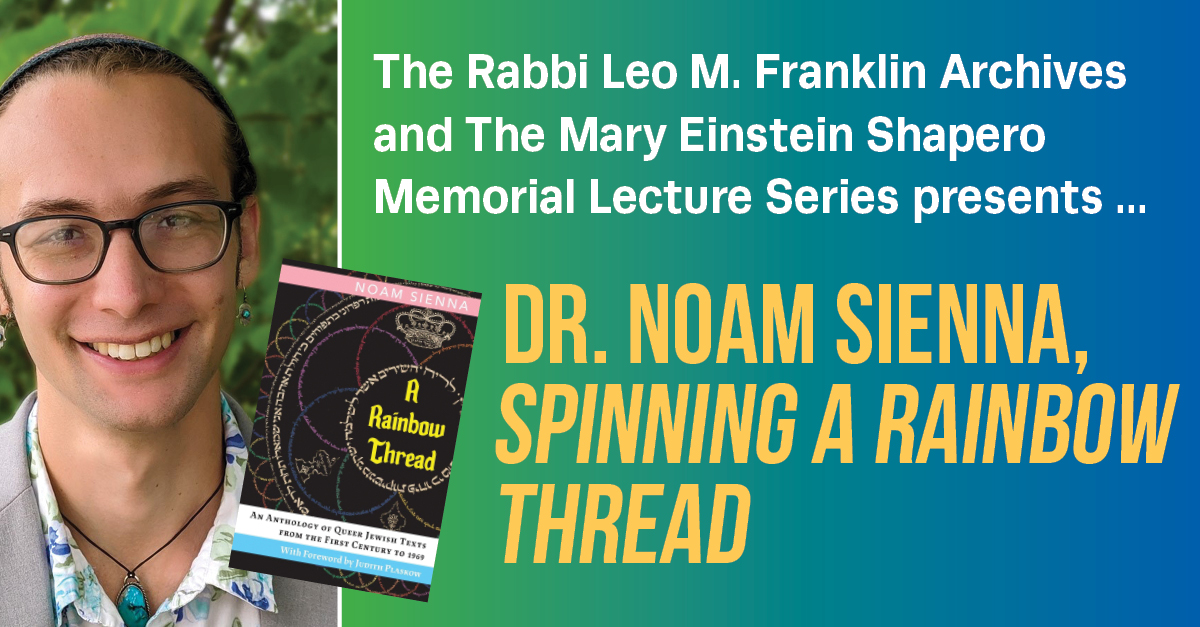 Join us as Dr. Noam Sienna presents “Spinning A Rainbow Thread: Reflections on Writing Queer Jewish History.” What is the place of gay, lesbian, bisexual, transgender, and queer Jews in history? Over the course of several years, historian Noam Sienna worked to uncover documents that until now have been scattered across the globe, and largely unrecognized. Pulling together these varied sources, written in over fifteen languages — which include poetry, literature, law, midrash, and memoir – Dr. Sienna created the very first anthology of queer Jewish history, released in February 2019. Drawing on this publication, Dr. Sienna spins a complex story about Jewish sexuality and gender across time and space.

Noam Sienna is a Jewish educator, artist, and historian, who specializes in Jewish culture in the medieval and early modern periods. He received a PhD in Jewish History and Museum Studies at the University of Minnesota in 2020, and also holds degrees in Anthropology and Religious Studies from Brandeis University and the University of Toronto. He has taught and lectured about Jewish cultural heritage at academic and community venues around the world, and he has published articles about Jewish history, culture, and art in both scholarly and popular journals. His first book, A Rainbow Thread: An Anthology of Queer Jewish Texts from the First Century to 1969, received the 2020 Anthology Award from the Lamda Literary Foundation and the 2020 Reference Award from the Association of Jewish Libraries.

Each year, The Mary Einstein Shapero Memorial Lecture series hosts a notable speaker. The enriching series is sponsored by the Honorable Walter Shapero and Kathleen Straus, and due to their generosity, this program remains free and accessible to all.

Free and open to the community.